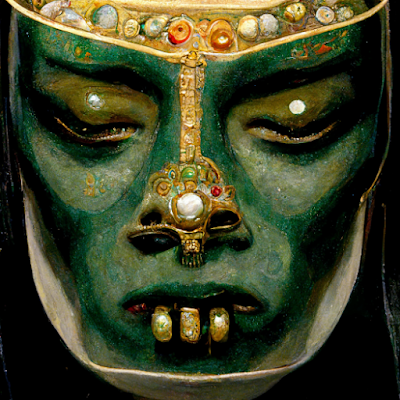 Legends of the Star Gods:

When the land was still young they came in their many ships, down from the heavens where they existed first. Here they, whom we call the travellers from the stars, found a forest covered land with abundant fruit and flowers, air filled with the songs of birds, the calls of monkeys, the growling of tigers and the trumpeting of elephants.

They set out to build high towers and great palaces to make their homes in and recruited the animals to help them in these efforts. The animals were directed to dig into the earth for stone and jewels, and to cut down trees and divert rivers and lakes. And many of the animals were taught to speak so that they could more easily be guided in this work.

It is said that the star-travellers could take the clay from which all creation was fashioned and mould and press it into new shapes as they saw fit. To make small fruits grow large, to make beasts stronger or walk upright where before they were on all fours, to give a snake limbs or to even make a fish breathe air and walk on land.

However even in their wisdom there was disagreement amongst them. First arguments, then conflict and eventually open war; although it is not known why or to what end. Battles raged on mountain tops and in deep caverns. Entire cities were destroyed with terrible magic, and ever more fearsome monstrosities were created with which to chase enemies across open seas and down into deep mines where it was hard for them to reach.

Eventually the wars of the star-travellers ended, but with no ultimate victor or vanquished. The lands were ravaged and our people were there amongst the ruins. In service we had been taught how to carve stone and pour metal. How to sail ships and cast nets. And how to tend forest gardens and herd animals. This is how we managed to survive in the aftermath of so much devastation.

The travellers from the stars left in their ships, for reasons as mysterious as what brought them in the first place. Although it is said some stayed behind guarding in mountain fortresses or still lie resting in tombs in deep caverns.

Even then there was no peace as the surviving animal servants warred amongst themselves for the inheritance that was left behind. Our people eventually prevailed over all others who then forgot how to speak, or perhaps choose no longer to talk with us because of what we did. Those that refused to submit fled into the forests and swamps, or into the cold mountains and the deep oceans where they plot to one day return and overthrow us.

Since those times we've multiplied, prospered and built new cities, using what we remember from our teachers to honour them, even attempt contact with them and request their return. There are ambitious amongst us who believe there is still yet more to learn from the star-travellers. And that there are to be found in the ruins of those ancient towers, cities and tombs knowledge and artefacts, magic and weapons that can benefit us still. There are even said to be the wrecks of some of their enormous ships situated in the remote parts of the land. Could they be repaired and sailed to the stars to meet their original captains?

Truth of the Star Gods:

Pick one or create your own truth.

1. The star-travellers are worshipped as gods but do not exist. They form part of or the entirety of the various pantheons of gods that exist in the religions of Sundaland.

Religions are a collections of memes that are passed down through the generations; providing a survival benefit to societies by increasing group cohesions and codifying cultural knowledge. Some, often less pious, religious leaders are aware of the cultural power they wield and do so consciously. In the same way a great warrior leads an army a religious leader can lead and control believers.

2. The travellers from the stars are gods from outside of time and space that were involved in the creation of the universe or perhaps closely tied to the ultimate creator. They came to earth in order to guide and teach humans and to help them develop civilisation.

The star-travellers are gods worshipped by the people of Sundaland. These gods interact with the world in seen and unseen ways but are capricious in nature and their aims and motives are not fully understood by humans. The people of Sundaland are at the mercy of the gods and do their best to gain their favour through rituals and religion.

What is the intention of these gods? Are they moved purely by self-interest or do they wish to impact humanity, either positively or negatively? Are they the ultimate power in the universe or is there something else out there?

3. The star-travellers are not gods but actually aliens that travelled to earth where they engaged in geo and bio-engineering projects using technology so advanced it seemed like magic. They genetically engineered several species to increase their mental and physical capabilities including the ancestors of humans. Variant human species such as Denisovans might be the result of these experiments or the initial stock that was uplifted. There were also experiments with reptiles, amphibians and newly genetically engineered creatures.

The evidence of the alien presence on earth still exists, albeit in a severely deteriorated state since it occurred thousands of years ago. There are various types of building and structures whose purpose we can not hope to understand as well as ruined cities, underground complexes and even space-ship wrecks to be found in Sundaland.

1. A newly discovered underground complex, lost city, ruined tower or star-ship wreck has been discovered near a remote village. The authority of your culture wants you to investigate the site and bring back whatever knowledge or artefacts you can find before neighbouring city-states hear about it as well.

Have other cultures learned of the site? How did they find it? Did the gods reveal the location to religious leaders? Are there elder-species (uplifted reptiles, amphibians, mammals) at the location? What can be found at the site?

2. A group of elder-species or elder-humans has reportedly moved into lands near our city-state. The people are fearful of might happen next. What are their motives and desires? Will they instigate violence, consume resources or attempt to live peacefully? The authority of your culture has a particular response in mind and wants you to set their plan into motion.

3. An ancient artefact has been discovered in a mine. It surely belonged to the Star Gods and has been brought to the religious leaders of your culture. However it is unclear what the purpose of the artefact is. Can you help find out what it is? Is it a weapon, a tool, or something else? How is it used? Who else wants it and what do they want to do with it? What are the consequences of its use?

4. Something has been disturbed which should not have been. A deadly disease spreads from an re-opened complex, a piece of technology has been activated and is transforming the land, elder-species have been set free from a hidden city after an earthquake, a star-god has been awakened from a thousand year slumber.